Chestnut Hill Center initiated a new activity this year, the Horizons Club.  The Club is for fathers and sons in 5ththrough 7th grade.  It teaches boys to become men of character, by learning to stick to a task until it is finished, to respect others, and to aspire to higher ideals.  For the fathers, the Club provides experienced advice to help them bring up their sons to be men of character.

The fathers and sons meet once a month. What happens at a meeting?  At the start, friends of Chestnut Hill Center who are young working professionals give a lively talk to everyone on themes such as will power, speaking the truth, and friendship.  We want the fathers to hear what their sons are hearing!  Then, Pat Hogan, a veteran father and the Horizons coordinator, takes the dads aside for a more in-depth discussion on matters of parenting.  While the discussion takes place, the boys are challenged by this year’s staff members, Ted O’Neill and Tom Keefe, in various games, and skill building activities . . . recently, they even had a contest in elementary computer programming.  Next, fathers and sons work on a project.  In the fall, they built model rockets, under the careful supervision of Stephen Devaney and his young boys.  Recently, Mike Madison showed them how to tie useful knots.  Each boy brought a rope home to keep up his newly-found skills.  Finally, we have a snack in the dining room, always an enjoyable time. 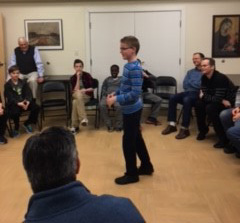 Horizons fathers and sons traveled up to Wynnview in Randolph, Vermont for a fun-filled weekend in late January and early February.  They flew down hills on sleds, played basketball and swam and ate in the cafeteria at the nearby Vermont Technical College facilities, built a bonfire in the snow, and shot off the model rockets that they had built in the fall semester.  The weekends have an important side to them, in that they serve to build lasting friendships among the boys and among the fathers.

Horizons Club will meet until late May.  Then, we will reconvene in September. The first event is a hike up Mt. Monadnock in New Hampshire.